How do Ratio Pyrometers work?

A pyrometer is a type of thermal sensor used for measuring high temperatures of a surface, often in large furnaces or kilns. These devices measure the temperature of an object or surface from the thermal radiation emitted, also known as radiometry. There are many applications where a standard one-color pyrometer reads the temperature incorrectly and they include:

A two-color or ratio pyrometer, such as Endurance Series, can operate properly even with these problems and indicate the correct temperature. 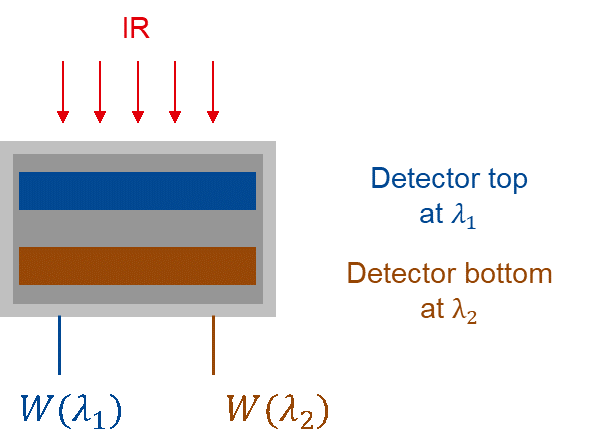 Detector #1 at wavelength λ1 will give an output of 500 units.

Detector #2 at different wavelength λ2 will output a signal of 1000 units.

Now what happens if somehow the signal from the hot target is reduced or prevented from getting to the detector?  This could be caused by a dirty window, object too small to fill the cone-of-vision, or maybe there is smoke in the line of sight.  The brown graph depicts an example with a 90% signal loss, but the target temperature is still 1500°C.  This is the same as having the apparent emissivity drop from 1.0 to 0.1.

Detector #1 will output a signal of 50 units.

Both signals have been reduced by 90% as compared to the upper curve (E=1.0). Note that 100 divided by 50 is again a ratio of 2, or the instrument will read 1500°C even though we have lost 90% of the signal. Every two-color thermometer has a limit as to how much signal can be reduced.  This is called the attenuation which can vary from 0% to as high as 95% of the signal and still read an accurate temperature.

Basically, a two-color thermometer works properly as long as whatever affects one wavelength, must affect the other wavelength the same amount.  Unfortunately, there are applications where the object emissivity is different for the two wavelengths for example measuring molten metals.  When the two-color thermometer looks at the molten metal, the signal ratio (or slope) will be incorrect and an error will occur in the temperature reading.

How can this be corrected?  All two-color thermometers have an adjustment called E-Slope.  When viewing the molten metal, the E-Slope adjustment is turned until the instrument reads the correct metal temperature.  The correct temperature may be obtained by using a disposable thermocouple.  This E-Slope adjustment simply corrects the ratio by a constant which corrects the instrument indication for the unequal spectral emissivities of the target.  Once the E-Slope is adjusted, then the problems of smoke, steam, dust, small targets, etc., are handled correctly by the instrument.