An infrared (IR) thermometer is a sensor that determines the temperature of an object by detecting and quantifying the infrared radiation emitted by measured target. An IR thermometer can be compared to the human eye. The lens of the eye represents the optics through which the radiation (flow of photons) from the object reaches the photosensitive layer (retina) via the atmosphere. This is converted into a signal that is sent to the brain. Fig. 3 shows how an infrared measuring system works. 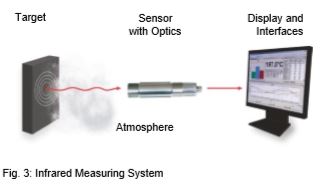 Every form of matter with a temperature above absolute zero (-273.15°C / -459.8°F) emits infrared radiation according to its temperature. This is called characteristic radiation. The cause of this is the internal mechanical movement of molecules. The intensity of this movement depends on the temperature of the object. Since the molecule movement represents charge displacement, electromagnetic radiation (photon particles) is emitted. These photons move at the speed of light and behave according to the known optical principles. They can be deflected, focused with a lens, or reflected by reflective surfaces. The spectrum of this radiation ranges from 0.7 to 1000 µm wavelength. For this reason, this radiation usually cannot be seen with the naked eye, see Fig. 4.

The invisible part of the spectrum, however, contains up to 100,000 times more energy. Infrared measuring technology builds on this. It can be seen in Fig. 5 that the radiation maximum move toward evershorter wavelengths as the target temperature rises, and that the curves of a body do not overlap at different temperatures. The radiant energy in the entire wavelength range (area beneath each curve) increases to the power of 4 of the temperature. These relationships were recognized by Stefan and Boltzmann in 1879 and illustrate that an unambiguous temperature can be measured from the radiation signal.

Fig. 5 shows the typical radiation of a body at different temperatures. As indicated, bodies at high temperatures still emit a small amount of visible radiation. Therefore, everyone can see objects at very high temperatures (above 600°C) glowing somewhere from red to white. Experienced steelworkers can even estimate temperature quite accurately from the color. The classic disappearing filament pyrometer was used in the steel and iron industries from 1930 on. 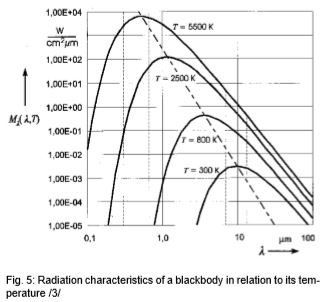 Looking at Fig. 5, then, the goal should be to set up the IR thermometer for the widest range possible in order to gain the most energy (corresponding to the area below a curve) or signal from the target. There are, however, some instances in which this is not always advantageous. For instance, in Fig. 5, the intensity of radiation increases at 2 µm – much more when the temperature increases than at 10 µm. The greater the radiance difference per temperature difference, the more accurately the IR thermometer works. In accordance with the displacement of the radiation maximum to smaller wavelengths with increasing temperature (Wien's Displacement Law), the wavelength range behaves in accordance with the measuring temperature range of the pyrometer. At low temperatures, an IR thermometer working at 2 µm would stop at temperatures below 600°C, seeing little to nothing since there is too little radiation energy. A further reason for having devices for different wavelength ranges is the emissivity pattern of some materials known as non-gray bodies (glass, metals, and plastic films). Fig. 5 shows the ideal—the so-called "blackbody". Many bodies, however, emit less radiation at the same temperature. The relation between the real emissive power and that of a blackbody is known as emissivity (ε) and can be a maximum of 1 (body corresponds to the ideal blackbody) and a minimum of 0. Bodies with emissivity less than 1 are called gray bodies. Bodies where emissivity is also dependent on temperature and wavelength are called non-gray bodies. Furthermore, the sum of emission is composed of absorption (A), reflection (R) and transmission (T) and is equal to one. (See equation below and Fig. 6)

Solid bodies have no transmission in the infrared range (T = 0). In accordance with Kirchhof’s Law, it is assumed that all the radiation absorbed by a body, and which has led to an increase in temperature, is then also emitted by this body. The result, then, for absorption and emission is: 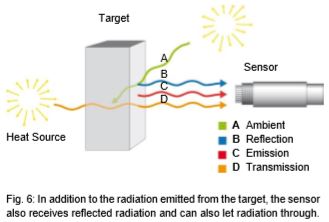 The ideal blackbody also has no reflectance (R = 0), so that E = 1.
Many non-metallic materials such as wood, plastic, rubber, organic materials, rock, or concrete have surfaces that reflect very little, and therefore have high emissivities between 0.8 and 0.95 (see emissivity values for most common materials.  By contrast, metals - especially those with polished or shiny surfaces - have emissivities at around 0.1. IR thermometers compensate for this by offering variable options for setting the emissivity factor, see also Fig. 7 (see emissivity values for most metals).

Our applications engineers can assist you in choosing the most efficient IR sensor for your target material, temperature range and type of application. 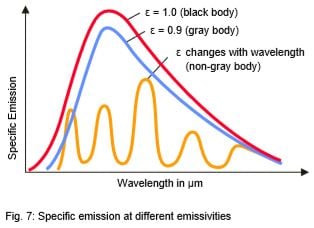